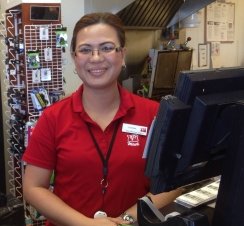 From CBC.COM: “Charina Villanueva has been in Yellowknife for two years under the temporary foreign worker program, working at Mac’s convenience store. (CBC)”
(Photo Courtesy of CBC.COM)

Businesses in Yellowknife will once again be able to hire temporary foreign workers after winning an exemption from a hiring ban imposed by the federal government.

Parts of Canada with high unemployment rates were barred from accessing foreign workers last June as part of a federal government overhaul designed to address abuse of the system.