Fake Marriages Are A Big Concern

Fake marriages are a big concern right now in Canada. 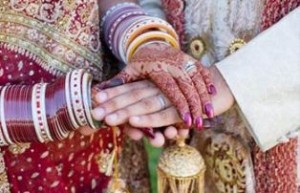 A Canada Border Services Agency (CBSA) report has warned that “marriages of convenience” in India “have become a threat to the integrity of Canada’s immigration program.”
Lexbase, Canada’s leading immigration publication under well-known lawyer Richard Kurland, obtained the May 2013 report under Access to Information from the “Migration Intelligence Section, Intelligence Operations and Analysis Division-Enforcement and Intelligence Operations Directorate” of CBSA.

The report bluntly notes: “There are already reports of less Indian females being born within Canada’s border, and given that the Indo-Canadian communities have strong preferences for intra-cultural marriage, there will be more competition for men to find opposite-sex marriage partners leading to possible increased family pressure on Indo-Canadian females to marry Indian men from Canada or abroad, as the children who were born after the sonogram revolution come to be of marriageable age.”